This week, Raychel and I again decided to take a quick 2 day trip to explore the beautiful sights of a new city. Ninh Binh is a short 4 hour train ride from where I live. I thought it would be a quick and easy trip… I was wrong. Usually, when you go traveling you hope for the best but plan for the worst. In Ninh Binh, the worse came.

As we got onto the train, the problems began. The scheduled time for arrival was 9:30am and the train conductors knock on your door to let you know you have arrived at your station. The train arrived at a station at 9:25 and I was slightly panicked because I didn’t know if this was the stop we got off. The train stated moving again and we decided to ask a stranger which way Ninh Binh was. “Ohh no,” he said and pointed in the opposite direction of the train “Ninh Binh.” Panic.

Train rolling along, Raychel and I sat for another 15 minutes discussing options: maybe lets just go all the way to Hanoi or get off at the next stop and wing it. The train stopped yet again and then the train conductor knocked on the door. “Ninh Binh,” he said. Surprised? Me too. We were just late…

The reason we chose to head to this city was, to be frank, a gorgeous picture we saw on Instagram. After further investigation, the city is known for its stunning views and intricate cave system. However, when we arrived, it nothing but clouds and rain. No beautiful sights to be seen. 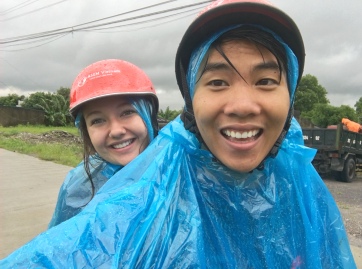 Again, we rented a motorbike as a means of travel and again, we ran into another problem. The motorbike wouldn’t start. It was extremely finicky and the ignition had to be pressed in the right way with a strong tug on the throttle. Finally, it started and we biked to our hotel… in the pouring rain… with cheap plastic ponchos. Needless to say we were wet and needed a hot shower. When we arrived, you guessed it, another problem.

The hotel was wet. Okay, I am being a bit dramatic, but the floor near the window and bathroom was wet. And that left everything else in the room damp. Do you know the feeling of your clothes when you dry it but its 10 minutes shy of being completely dry? Those were the blankets I slept on.

Even though I was under the weather (ba-dum-tss), we decided to roll with the punches and head back into the rain to explore the city. By this point, the rain was coming down so hard, it caused flash floods around the city. We rode around for about three hours in the rain to find an Instagram worthy photo. None to be found. We couldn’t even get to the “Mua Caves” because of the flooding.

Finally, we headed back to the hotel to take a break from the rain and regroup. It had already been such a long day and it was 3pm. We headed back out to find dinner and another problem struck. The motorbike had a flat back tire. I pushed the motorbike to a street corner where this older gentleman started tearing the bike apart. In the end he was just pulling out the tube and putting a patch on the tire. The long day turned into a super-long day.

The next day was the saving grace. Sunshine. Warmth. Views. First we headed to see a pagoda of the city. And encountered another problem – actually more of a funny story. This time Raychel was captain of the bike. We got off so she could push the bike up a curb. She pulled the throttle a bit too hard, it ran into a wall and the bike fell over. She immediately looks up at me and says “Perry, I dropped the bike,” at which point I chuckled to myself. It fell on the opposite side where she was so all was good. Except maybe the scuff left on the bike.

We again headed to the Mua Caves to see the city from a different perspective. When we arrived to the Caves, we left the motorbike on the side of the road in order to ride a paddle boat over to the flooded entrance. Then walked on a flooded walkway to the start of the hike. It was definitely an interesting experience. After all the problems that were encountered, the view was more than worth it. The only downside was that it went from cold to sweltering. I was literally dripping in sweat which meant mosquito bites.

Of course, it wouldn’t be travelers nightmare without another problem. As we were leaving and picking up our bike on the side of the road, I locked the keys inside the bike! Vietnamese motorbikes have a compartment under the seat so that you can store a backpack sized item while riding. We had a sweet french couple to help us out and finesse the seat to grab the key.

Let’s not forget, there’s always a big finish. To round out the problem ridden trip, the train back got cancelled due to flooding! But we headed to the train station without that knowledge and by some turn of fate, the train was rescheduled to run only 30 minutes later. Thinking this train would be only 4 hours back, we booked a seat. But heres the twist. The train took 13 hours to make its trip. 13 hours. It was parked for 8 hours because of the flooding.

Overall, this trip was chock full of problems. But hey, that is part of the adventure of traveling.

Until next time,
Perry

"Don't let the plan get in the way of the Journey."